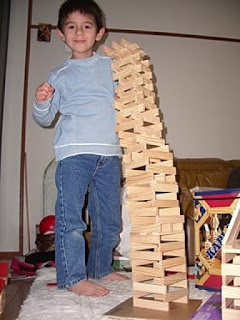 About ten years ago, my kids got a 200-piece set of kapla blocks as a Christmas gift. There is exactly
one size of Kapla block, 120 mm by 24 m by 8 mm (about 4 3/4 inches long). At first, a box of 200 identical blocks looked too simple to be much fun, but after getting addicted I realized that the simplicity is what's great about them. Toddlers can stack them one on top of another. Older kids can build simple structures. Serious hobbyists have built structures over 50 feet tall. You can put them together in endless combinations, and they are precision-cut so you can build really tall without them getting wobbly.

The tower in this photo was built by my son (then age six). My daughter (then age four) built the structure that you can just see in the right foreground. Our youngest son (now age three) has been playing with Kapla blocks practically since he was born.

On this page I discuss Kapla Blocks because they are the original and still the most popular, but Keva Blocks and Citiblocs are virtually the same product from different manufacturers. The three brands of blocks are exactly the same size and manufactured to similarly high standards. All three are made of pine. All three kinds can be mixed and matched without a problem.

We have Kapla blocks at my home and Citiblocs at the preschool where I work. The Kapla blocks seem to get less dinged up, but that may just be because the Citiblocs get heavier use.

Keva are the cheapest as of this writing, but please see below for current prices on Amazon for a set of 200 blocks, which I think is the bare minimum. We've added more sets to our original starter set. Different sets have different kinds of storage containers; the Kapla ones are quite nice. Some sets come with idea books too. You can click through the product picture to see the various sets.

I used to think Lego/Duplo was the ultimate in amazingly versatile building blocks, but I've changed my mind. Kapla planks can be placed in any dimension (there's no up, down or sideways) and they don't interlock, so pieces can be placed at any angle. They are lightweight, virtually unbreakable, and too big for a baby to swallow so they're safe in a house or day-care center with children of various ages. My sixteen-year-old son enjoys them as much as the three-year-olds at my preschool. These blocks are well made and could last for generations.


Leave your ideas or questions in the comments below. I'll try to answer any questions you have.

Email ThisBlogThis!Share to TwitterShare to FacebookShare to Pinterest
Labels: all ages, Spatial Reasoning