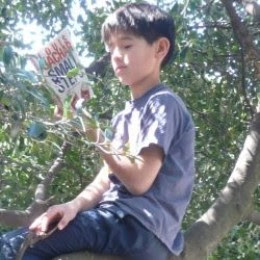 Many boys aren't interested in books, especially books that challenge them more than Captain Underpants and Diary of a Wimpy Kid. It doesn't help that most early childhood and elementary teachers are women, and that moms are usually more involved in their sons' education than dads are. (Don't get me wrong--I appreciate women in education; I just wish more men would be involved too!)
To make it onto this list of great Christian book series for boys, the series has to be fun to read and in line with Christian values if not overtly Christian. Most importantly, it has to pass the T test. T is my ten-year-old son. He has read and enjoyed books from all the series on this list. (That's him reading in the tree.)


The Sugar Creek Gang series of 36 books follows the adventures of Bill Collins, Poetry, Dragonfly, Big Jim and the rest of the gang as they fish, solve mysteries, get into fights, make up, and generally try to do what's right. These page-turners, written between 1940 and 1970, build faith and inspire boys as much today as they did when first published. The kindle versions are less than two bucks apiece when you buy the six-packs from Amazon.


Dave and Neta Jackson are the authors of the Trailblazer Books, a series of 40 historical fiction adventure books in which young protagonists interact with heroes of the faith like David Livingstone, William Tyndale, and John Bunyan.

Roundup of the Street Rovers with an orphan named Kip as protagonist, chronicles the lives of street kids in New York at the turn of the last century and how Rev. Charles Brace started the Children's Aid Society of New York and the orphan trains that took street children from New York to be adopted by families in the Midwest. My son has read most of the series and named this one as his favorite after much deliberation.

The Chronicles of Narnia - Read before or after watching the movies


C. S. Lewis's Chronicles of Narnia are my son's favorite books (mine too actually). Any boy who hasn't yet met Peter, Edmund, Eustuce, Caspian, Shasta, Aslan, Tumnus, Reepicheep, and Puddleglum are in for a treat!

These books can be read and enjoyed at many different levels, and at every stage in life. T's favorite is Prince Caspian, and mine, for the moment, is The Silver Chair.

Do you have experience with any of these books? Can you recommend others? Please leave your comments and recommendations! (I originally posted this article on a different platform. T is now 16, and his brother, D, is now reading these books.)

Email ThisBlogThis!Share to TwitterShare to FacebookShare to Pinterest
Labels: books